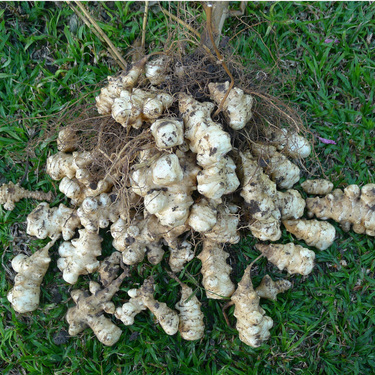 INTRODUCTION:
The reason why many of our ancestors survived the world wars and the depression was that they did not depend on centralised resources and governments to feed them. Except for hunting, fishing and foraging almost every household grew their own food plants. As modern food producers continue to streamline food production we have gone from thousands of edible food plants to a chosen few, usually by monocropping and pesticides.
Somewhere along the way we have been duped to believe that growing food is difficult and a full time occupation. This is only true if you are trying to grow plants out of their natural habitat, like corn, potato and tomato, when there are thousands of easily grown food plants available that can produce an abundance in very small areas. Article 38 introduces Helianthus tuberosus – The Ground apple:

QUOTE:
“The old appeals to racial, sexual, and religious chauvinism and to rabid nationalist fervor are beginning not to work. A new consciousness is developing which sees the Earth as a single organism and recognizes that an organism at war with itself is doomed.”
~ Carl Sagan


HELIANTHUS TUBEROSUS:
This plant goes by many names: Jerusalem artichoke; Sunroot; Sunchoke; Earth apple. The term 'Ground apple' translates best into the Turkish name 'Yer elması'. Of all easy-to-grow superfoods to suit our region, I'd put the ground apple in the top ten list. It is a close relative to the sunflower, however in the case of ground apple the tubers are desirable. Being a frost hardy perennial it suits many climates, even my origin Sweden, where an experimental gardener managed to produce 10 kilos of tubers from one square meter.
Since I am applying a no-till technique in my garden I usually stick with perennial leafy vegetables, avoiding tuberous food in order not to disturb the soil. But since a friend gave me a few tubers of this plant I decided to make an exception. I simply put a few tubers on bare ground and covered with a mixture of wood chips, leaves and goat manure. During summer they produced tall but fragile stems which fell all over the garden. So I cut the stems off and sort of forgot about this particular plant, figuring it was dead and I best focus on my other 100 some plants...
This week, one year after planting, my neighbour's chickens skipped the fence and started clawing up my wood chips which (unlike my neighbour's tilled soil) is teeming with earth worms and other chicken gourmet food. Currently also teeming with tubers of ground apple, scattered all over the garden where the chickens had disturbed the soil. So I rearranged my wood chips, and put every tenth tuber back to regrow, the rest goes for soup. Noting the sheer abundance of tubers this is obviously a plant that will reproduce, spread and produce more and more every year. Thanks lots chickens, just don't do it again, or my next soup shall have birdmeat in it...

MYTHOLOGY & HISTORY:
* Before the arrival of the Europeans, native Americans cultivated Helianthus tuberosus as a staple food source.
* One explanation for the name 'Jerusalem artichoke' is that the Puritans, when they came to the New World, named the plant with regard to the "New Jerusalem" they believed they were creating in the wilderness.
* The Jerusalem artichoke was titled 'best soup vegetable' in the 2002 Nice Festival for the Heritage of French Cuisine.

MODERN RESEARCH:
The tubers are rich in inulin, a starch which the body cannot digest. Some people are not tolerant of inulin as it ferments in the guts, producing gases. The inulin from the roots can be converted into fructose, recommended for diabetics. In fact, ground apple is an old folk remedy for both diabetes and rheumatism. Consuming ground apple is beneficial for the stomach, promotes the flow of urine and discharge of bile, and promotes health in general. One source claims it to be aphrodisiac.

EDIBLE USES:
The tuber develops a pleasant sweetness during the winter, especially if subjected to frost, and is then reasonably acceptable raw. Otherwise it is best cooked, and can be used in all the ways that potatoes are used. The big challenge is getting the peel off the uneven surface. Cutting off uneven surface (excellent for replanting) and peeling with a wire mesh scourer works well. I usually make soup from ground apple: Half amount potato, half amount ground apple, peel and chop into cubes. Boil with milk, broth, salt and pepper, then smooth with kitchen blender.

OTHER USES:
The plant is a good source of biomass. The tubers are used to make alcohol, considered superior to that made from sugar beets. Roasted tubers are a coffee substitute.

IMPORTANT NOTE:
The ground apple comes with 3 disadvantages: The inulin may give you gasses, it does not store well after harvesting, and it is fiddly to prepare.