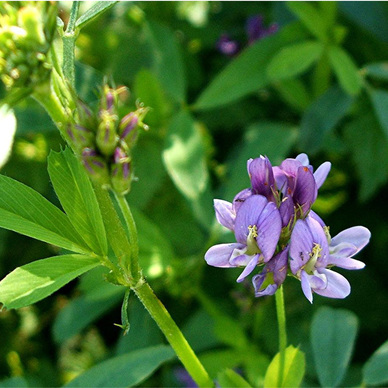 QUOTE:
"Gardening has been largely a lost art form with plots drying up and being replaced in favour of lawns, parking lots, and other commercial endeavours. People have decided to completely forego the skill of gardening in favour of completely depending on large scale farming operations to produce their food. The implications of this trend are now starting to be seen, and they could be disastrous.”
~ Derek Henry

MEDICAGO SATIVA:
Alfalfa is a very versatile plant that can adapt to a wide range of climatic conditions from cold temperate to warm sub-tropical. It has a deep taproot, descending 6 meters or more into the soil, and once established, tolerates drought and extremely dry conditions. It is able to fix large quantities of atmospheric nitrogen, which makes it an excellent green manure. It is very vigorous from its second year, producing a huge bulk of material that can be cut down 2 or 3 times during a season. The plant is self-fertile and is noted for attracting wildlife, promoting pollination of other species.
Alfalfa has been cultivated as livestock fodder since at least the era of the ancient Greeks and Romans and is still popular as a reliable livestock fodder. Alfalfa is native to warmer temperate climates and can be found wild all over Turkey. All in all a super plant both for soil, fodder and green manure. Less widespread is the fact that alfalfa is also an excellent food plant for humans.


MYTHOLOGY & HISTORY:
* Alfalfa is a leguminous plant of the pea family, known for its tolerance of drought, heat, and cold; for the remarkable productivity and quality of its herbage; and for its value in soil improvement. It is widely grown primarily for hay, pasturage, and silage.
* Alfalfa cultivation is discussed in the fourth century AD book 'Opus Agriculturae' by Palladius, stating: "One sow-down lasts ten years. The crop may be cut four or six times a year.”

MODERN RESEARCH:
Leaves and young shoots are very rich in vitamins, especially A, B, C and K, and is a good source of protein. It is also rich in chlorophyll and carotene, both of which have proven health benefits. Alfalfa leaves, either fresh or dried, have traditionally been used as a nutritive tonic to stimulate the appetite and promote weight gain.
Consuming the plant prevents scurvy, promotes the flow of urine, acts antibacterial, reduces fever, controls internal bleeding, reduces high blood sugar levels, and improves health in general. Alfalfa also prevents and combats anemia and jaundice. The plant is also useful in treating problems related to menstruation and menopause. The expressed juice is a mild pain killer. A poultice of heated leaves has been applied to the ear in the treatment of earache. The leaves also contain anti-oxidants, preventing cancer. The root combats fever and has been prescribed in cases of highly coloured urine. Also used to combat asthma, diabetes, and gastrointestinal disorders. [PFAF]

EDIBLE USES:
Alfalfa has long been cultivated for its edible seed, which can be sprouted and eaten in salads, sandwiches or cooked in soups. The seeds can also be ground into a powder and used as a mush, or mixed with cereal flours for making a nutritionally improved bread. Leaves and young shoots are eaten raw or cooked. An appetite-stimulating tea is made from the leaves, which has a flavour somewhat reminiscent of boiled socks and is mildly laxative.

OTHER USES:
Alfalfa is mainly cultivated as livestock fodder, green manure and to restore depleted soil. Being a very deep rooting plant, it brings up nutrients from deep in the soil and make them available for other plants with shallower root systems, making it an excellent companion plant. A very good bee attractor, promoting pollination of surrounding plants. Growing alfalfa encourages the growth of dandelions, fruit trees and grape vines, but  does not grow well with onions or other members of the Allium genus.
Alfalfa is an excellent source of biomass. It is possible to produce more than 2 tonnes of protein from the leaves per hectare per year. Seed yields average around 200 kilos per hectare. In addition, the plant residues remaining could be used to produce the equivalent of about 10 barrels of oil per year. The fibre of the plant has been used in making paper and seeds are used in paints and varnish.

IMPORTANT NOTE:
A super plant in general, but not even alfalfa comes with out drawbacks. Although very nutritious in moderation, it can trigger attacks in patients with systemic lupus erythematosus and large quantities can affect liver function and cause photosensitization. The plant also contains saponin-like substances, although they are potentially harmful, saponins are poorly absorbed by the human body and so most pass through without harm. Thorough cooking will remove most of them.
Alfalfa sprouts and seeds contain canavanine, which may cause an ulcerous disease of the skin. Eating large quantities of the leaves may cause a breakdown of red blood cells. The FDA advises that children, the elderly and people with compromised immune systems should avoid eating alfalfa sprouts due to bacterial contamination. Avoid during pregnancy and lactation, for people with hormone sensitive cancer, and for people with gout. It should not be prescribed to people with auto-immune diseases such as rheumatoid arthritis.
My own view on all these negative aspects is that I promote biodiversity as much as food diversity. Most common diseases derive from mono-cropping and chemicals (for plants) and a limited diet (for humans). As a conclusion alfalfa has a lot more benefits and a lot less drawbacks than meat or wheat and is a lot easier to produce and maintain.