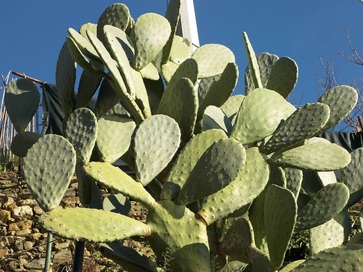 INTRODUCTION:
If you find a thick, succulent plant with clusters of spines it is certainly a member of the Cactus family. Worldwide, there are now about 125 genera and more than 2,000 species of cacti registered and recent research boldly claims that ALL cacti are in fact edible [Boutenko, 2013]. The Opuntia genus of the cacti family is thought to be native to Mexico but has spread throughout the world as a cultivated crop, growing well on dry, arid soil, sometimes reproducing to such a degree some consider it invasive.
The most common culinary species of Opuntia is the Indian Fig Opuntia (Opuntia ficus-indica), which is also the only one I have found registered to grow in Turkey, especially along the southern coastal line. The fruit can be found in the vegetable markets around August, but the whole of the plant (which can grow beyond 4 meters in height) grows all year round and is very tasty indeed (reminding slightly of okra). Thus, just another example of free food in abundance growing at our feet, far more healthy than the processed and expensive foodstuff of the supermarkets. This is the fifth article on wild edibles, introducing the Prickly Pear Cactus:


OPUNTIA FICUS-INDICA:
Common English names: Prickly Pear, Cactus Pear, Indian Fig Opuntia, Barbary Fig, Paddle Cactus, Nopales. Common Turkish names: Frenk yemişi, Firavun inciri, Frenk inciri, Hint inciri, Kayındili, Kaynanayumruğu, Mandadili, Mart yemişi, Misir inciri. Around our parts mostly known as 'Misir inciri'. The Latin name 'Opūntia' is feminine of 'Opūntius' (=of Opus) - An ancient town of east-central Greece, where, according to Theophrastus, an edible plant grew which could be propagated by rooting its leaves.
The plant has naturalized in the Mediterranean where it grows in dry arid and rocky places. Although it does not appreciate a pure maritime climate and I have never seen it down in Fethiye, it is enough to head inland and up the mountains, like Kayaköy, where it grows in abundance next to big rocks, stonewalls or even blocks of concrete. An IMPORTANT NOTE on this plant is that it is a cactus and it DOES STING! The small spines of the fruit can be easily burned off by fire and the bigger spines of the pads can be cut off with a knife.

MYTHOLOGY & HISTORY:
* The plant spread to many parts of the Americas in pre-Columbian times, and since Columbus, have spread to many parts of the world, especially the Mediterranean, where they have become naturalized (and in fact were believed to be native by many). This spread was facilitated by the carrying of fruits on ships to prevent scurvy.
* Cactus juice extracted from Opuntia pads and stems is one of the most commonly used additives in earthen plaster to construct earthen houses.
* The split stems have been bound around injured limbs as a first aid measure and the spines of some species were once used as phonograph needles.
* The prickly pear fruit is used as the main ingredient of a popular Christmas beverage in the British Virgin Islands, called 'Miss Blyden'.”

MODERN RESEARCH:
Prickly Pear Cacti are a great source of vitamin C, calcium, magnesium, and copper. Consuming the plant stabilizes blood sugar levels, making them extremely desirable for diabetics. Prickly Pears also reduce brain swelling and are effective for treating concussions and hangovers [Rodriguez, 2012]. The gel inside the pads is emollient and is beneficial to the skin, much like Aloe vera.
The flowers are astringent and are used to reduce bleeding and treat problems of the gastro-intestinal tract, especially diarrhoea, colitis and irritable bowel syndrome. The flowers are also used in the treatment of an enlarged prostate gland. The flesh of the cactus has also been found to purify water. A project at the University of South Florida is investigating its' potential for low-cost, large-scale water purification.

EDIBLE USES:
Foodwise all parts of the Prickly Pear Cactus sees many uses and recipes in South America, but to my knowledge the local uses seems limited to the culinary use of the fruit: Eating raw or making jams. The fruits of prickly pear cactus comes in red, yellow or white, although I have only seen red and yellow around the Fethiye area. It can be eaten raw, cooked or dried for later use. It is very refreshing, and somewhat like watermelon in flavour. The pads, once the needles have been removed, can be cooked similarly how ocra would be prepared. Flowers and seeds are also edible.

OTHER USES:
A gum is obtained from the stem, used as a masticatory or mixed with oil to make candles. The juice of the boiled stem segments is very sticky and can be added to plaster, whitewash etc to make it adhere better to walls.
Powered by