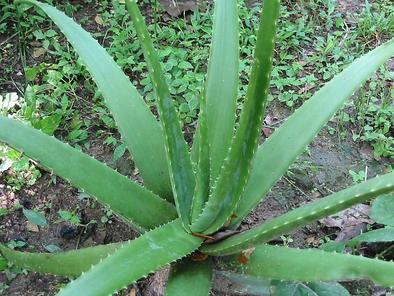 INTRODUCTION:
The hellish heat of summer is finally coming to an end. It would seem to me that this part of the world has neither spring nor autumn, but merely two seasons: Hellish hot and dry season and water soaked rain season, and number two will soon be upon us along with the thunder and the power outs.
As the cycle of planet Earth revolves so does the cycle of nature: When the typical wild edibles such as mallow, nettle, calendula, daisy and dandelion pop out from the ground it is a sign to start planting winter crops. Then again there are a few plants that seem to defy the laws of nature and do not care about neither flood nor drought. Cacti is one example. My eighteenth article introduces the uncrowned king of thorny succulents – Aloe vera.


ALOE VERA:
The mysterious world of Aloe vera does indeed seem to defy nature; Even during the hottest months this plant seems to produce water out of thin air, for behind its' rough and thorny exoskeleton rests a moist gel, a substance which is disputably the most potent skin healer and beautifier known to mankind. As an edible, many sources claim Aloe vera to be outright poisonous, where as more recent research claim it not only to be edible, but extremely beneficial to the human physiology. Common sense dictates it's one of those very potent medicinal plants just like sage: Very healthy in small doses, but you wouldn't stuff your belly with it.
Common English names: Chinese Aloe, Indian Aloe, True Aloe, Barbados Aloe, Burn Aloe, First Aid Plant. Common Turkish names: Sarısabır, Ağu, Sabırlık.

MYTHOLOGY & HISTORY:
* Aloe vera’s use can be traced back 6,000 years to early Egypt, where the plant was depicted on stone carvings. Known as the “plant of immortality,” aloe was presented as a burial gift to deceased pharaohs.
* Legend claims Cleopatra herself used Aloe vera to stay young and beautiful, and Alexander the Great healed an inflammated wound caused by an arrow, saving his life, effectively altering the course of history.
* Early records of Aloe vera use appear in the Ebers Papyrus from the 16th century BC in both Dioscorides' De Materia Medica and Pliny the Elder's Natural History written in the mid-first century AD along with the Juliana Anicia Codex produced in 512 AD.

MODERN RESEARCH:
Scientific evidence for the cosmetic and therapeutic effectiveness of Aloe vera is limited and contradictory. Despite this, the cosmetic and alternative medicine industries regularly make claims regarding the soothing, moisturizing, and healing properties. Although modern research is contradictory, two distinct types of medicinal uses have been proven: The clear gel contained within the leaf makes an excellent treatment for wounds, burns and other skin disorders, placing a protective coat over the affected area, speeding up the rate of healing and reducing the risk of infection. The second use comes from the yellow sap at the base of the leaf, it is called bitter aloe, which is a useful digestive stimulant and a strong laxative.
As an edible Aloe vera is still used as a traditional remedy for a variety of conditions, including diabetes, asthma, epilepsy, and cancer. It is also used topically for osteoarthritis, burns, sunburns, and psoriasis. In Chinese medicine it is used for fungal diseases. In Indian medicine it is used for stomach tumours, constipation, colic, skin diseases, infections, and expelling parasites from the gut. The Food and Drug Administration (FDA) has approved Aloe vera as a natural food flavoring.

IMPORTANT NOTE:
The plant is strongly purgative and laxative, so great care should be taken over the dosage.