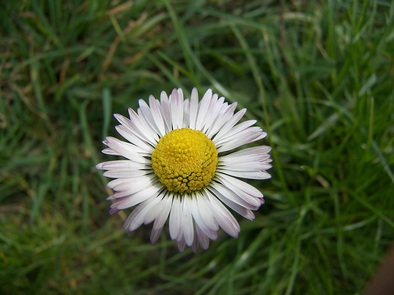 INTRODUCTION:
With around 140 000 unknown chemicals released into the atmosphere since the dawn of industrialization, an increasingly unpredictable climate and a rapidly growing global population, food security has become a serious concern. There are over 20 000 species of edible plants known in the world, yet fewer than 20 species now provide 90% of our food. Yet as mono-cropping, pesticides and biochemistry backfires over and over again, even more resources are pushed into the same old machinery to stabilise the 20, wreaking havoc upon our natural biotopes and destroying the other 20 000. Economically profitable, but a recipe for disaster for nature and our own species.
Now that's just plain stupid! So let's have a look at the other 19 980 instead, shall we!? The Mediterranean provides an abundance of wild edible plants, and this column is a contribution to preserve that abundance. This is the fourth article, introducing the Common daisy:

QUOTE:
”The degrees of separation between the consumer and the consumed have increased so much that it now means we’re completely unaware of the levels of destruction and suffering embodied in the ‘stuff’ we buy.”
~ Mark Boyle (The moneyless man)


BELLIS PERENNIS:
Common names: English: Daisy, Lawn daisy, Bruisewort, Woundwort, Mary's rose. Turkish: Koyungözü, Papatya, Yabani papatya, Çayır papatyası, Koyun çiçeği. The common daisy is an evergreen perennial growing up to 2 decimeters in height and is currently a very common sight by the roadsides, meadows and lawns surrounding us. The latin name 'Bellis perennis' translates into 'Pretty everlasting', and the English name 'Daisy' is considered a corruption of 'day's eye', as the flower closes at night and opens in the morning. Most locals would probably referr to it as 'Papatya', although that name also includes many other different flowers from the same family.

MYTHOLOGY & HISTORY:
* During the Roman war campaigns field surgeons used to gather daisies along the road, extracted the juice, and soaked bandages in it before binding battle wounds.
* "It is a princely remedy for old laborers, especially gardeners." [Burnett]
* An old story tells how daisy acquired its charming appearance: Rose, the queen of the flowers, had a birthday party and all the flowers were invited. One little flower was left out, however – it was shy of its modest appearance and was happy to whisper its congratulations from afar. But the wind carried the flower’s words to the queen, who assured her that there was no need to be ashamed: Its dress was spotlessly white and it had a heart of gold. This made the little flower blush, and ever since then the tips of its ray-florets have been pink.

MODERN RESEARCH:
Bellis perennis: is a mild painkiller; suppresses muscle spasms; is a cough suppressant; soothes and softens skin and tissue; aids digestion; is beneficial to the respiratory system; purifies the blood; is used in the research of cancer. An infusion is used in the treatment of catarrh, rheumatism, arthritis, liver and kidney disorders. Daisies also have a reputation for effectiveness in treating breast cancers, and recent research (1994) has been looking at the possibility of using the plant in HIV therapy. Like all dark greens it strengthens bones, reduces the risk of cancer, and benefits diabetics.
Chewing the fresh leaves is said to be a cure for mouth ulcers, but even though leaves and flowers are edible raw they are not particularly tasty, thus the plant is mostly used as a medicinal herb in concoctions or infusions. The flowers and leaves can be used fresh in a poultice for treating wounds, bruises, acne and boils. A mild decoction may ease complaints of the respiratory tract, rheumatic pains and painful or heavy menstruation. A strong decoction of the roots has been recommended for the treatment of scorbutic complaints and eczema, though it needs to be taken for some time before its effect becomes obvious. It is also said to be especially useful in treating delicate and listless children, and an infusion makes a decent insect repellant.

EDIBLE USES:
Daisies are a popular domestic remedy with a wide range of applications and the medicinal properties were recorded as far back as Gerard’s Herbal in the 16th century. Young leaves can be eaten raw in salads or cooked. Flower buds and petals can be eaten raw in sandwiches, soups and salads. It is also used as a tea and as a vitamin supplement. Chewing the fresh leaves is said to be a cure for mouth ulcers, but even though leaves and flowers are edible raw they are not particularly tasty, thus the plant is mostly used as a medicinal herb in concoctions or infusions.

IMPORTANT NOTE:
My fourth article steps away from what can be found through common urban sources and approaches the wild. Even though daisies are edible they are not properly considered ”food” in the way (for example) spinach is, but rather counts as a medicinal herb. I have seen it in bundles at the vegetable markets but I do not know if it is for the purpose of decoration, salad or tea. It is also available in dried form as a tea from the herbalist stalls by the fish market in Fethiye.
In the rural landscape surrounding us, daisies are as common as they are healthy, and even though it has many look alikes (such as camomile and feverfew) none out of the 24 000 species to make up the sunflower family have been reported dangerous. Even so, the daisy is a potent flower and might cause allergy to some people. If you decide to forage always do your research well and ask locals, or you might end up with a poisonous buttercup in your belly! I advise extreme caution when foraging wild plants due to the abundance of look-alikes and possible poisonous plants still unaccounted for. Harvest and use wild plants at your own risk!
Powered by