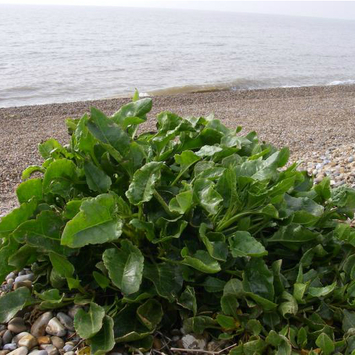 INTRODUCTION:
There are many things I do not understand in this world, this is one of them: Many botanists and forestry institutions advise against foraging wild edibles in the forest, since it might deplete certain species. At the same time many domesticated edible vegetables, originating from these wild ancestors, are becoming harder and harder to grow, requiring water and pesticides. In fact, some modern food plant species are interbred with their wild ancestors in order to make them stronger, hardier and more resistant. And after all this, sometimes these wild ancestors are actually collected or grown, presented as super food and delicacies in gourmet restaurants. The big question, of course, is if the wild ancestors are hardier, better tasting & healthier, why are there domesticated hybrids around to begin with? Why not take the seeds of the wild plant and introduce them directly into agriculture? My twentysecond article introduces the mother of beets - Beta vulgaris maritima:


BETA VULGARIS MARITIMA:
English: Sea beet. Turkish: Yabani pancar.
Along the undisturbed shores, especially of the Mediterranean Sea and the European North Atlantic Ocean, is a quite widespread plant called Beta vulgaris maritima by botanists, or more commonly Sea beet. The sea beet is the wild ancestor of common vegetables such as Beetroot, Sugar beet, Spinach beet, and Swiss chard. Its' leaves have a pleasant texture and taste when served raw or cooked, and because of this, it is also known as wild spinach. The wild plant has a long history of being harvested and used both for food and as a medicinal herb.
“The plant has had, and will continue to have invaluable economic and scientific importance in the future: Selection applied after domestication has created many cultivated types with different destinations. Sea beet crosses easily with the cultivated offspring. This facilitates the transmission of genetic traits lost during domestication, which selection processes aimed only at features immediately useful to farmers and consumers may have depleted. // Indeed, as with several crop wild relatives, Beta maritima has been successfully used to improve cultivated beet’s genetic resistances against many diseases and pests. In fact, sugar beet cultivation currently would be impossible in many countries without the recovery of traits preserved in the wild germplasm.”
These are some fancy words I nicked from scientific and botanist sites. My own question is still, in the face of future food security, why are the sensitive hybrids still grown and eaten, and not the original, which require neither water, nor pesticides, nor maintenance? Another grand mystery in this is that the original species is a perennial, it will come back year after year from the root, where as the domesticated versions are biennals at best.

MYTHOLOGY & HISTORY:
* A grand irony of the Sea beet, is that it is considered a saline plant (growing wild by the ocean shores it thrives in gushes of salt water), yet through domestication it has become one of the greatest sugar producer of our time: The sugar beet.
* Available evidence, such as that provided by Aristotle and Theophrastus, suggests the leafy varieties of the beet were grown primarily for most of its history, though these lost much of their popularity following the introduction of spinach.
* The ancient Romans considered beets an important health food and an aphrodisiac.

MODERN RESEARCH:
Although little used in modern herbalism, beet has a long history of folk use, especially in the treatment of tumours of all kinds, preventing cancer cells to spread. The juice has been applied to ulcers. Leaves and roots used as an emmenagogue. In the old days, beet juice was recommended as a remedy for anaemia and yellow jaundice, and, put into the nostrils to purge the head, clear ringing ears, and alleviate toothache. Beet juice in vinegar was said to rid the scalp of dandruff, and was recommended to prevent falling hair. Juice of the white beet was said to clear obstructions of the liver and spleen.
Culpepper (1653) recommended it for treating headache and vertigo as well as all affections of the brain.
Beets are low in calories and have zero cholesterol and a minute amount of fat. Nutrition comes from the beets' vitamins, minerals, and unique plant-derived anti-oxidants.
A phytochemical compound, glycine betaine, is found in the root. Betaine lowers the chance of coronary heart disease, stroke, and peripheral vascular diseases. Beets in raw form are high in folates. Folates are essential in the synthesis of DNA within cells. Vitamin-C is found in small amounts. The root provides B-complex vitamins including niacin, pantothenic acid, and pyridoxine , and minerals such as iron, manganese, copper, magnesium, and potassium, lowers the heart rate and regulates metabolism in the cells. Beet greens contain vitamin C, carotenoids, flavonoid anti-oxidants, and vitamin-A.

IMPORTANT NOTE:
All members of the beet family contain oxalic acid. Beet greens and Swiss chard are both considered high oxalate foods which have been implicated on the formation of kidney stones. Wild or domesticated, do not over consume this plant!