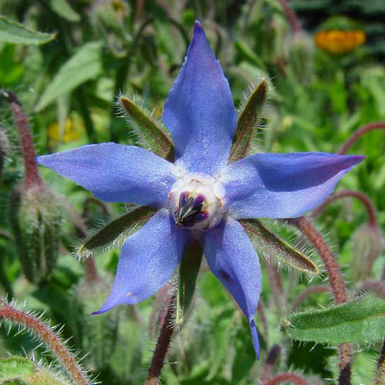 INTRODUCTION:
The reason why I keep writing these articles without getting any pay what so ever is simple. I am an idealist. I see a world full of greed and corruption, injustice and madness, poverty and famine, poisoned biotopes and a tremendous abuse of resources, and I wish to change what I can. I believe I have knowledge to do so, but not the power to enforce it. Not alone. This column is my attempt to spread knowledge.
My final goal in this life-dedication of herbal knowledge is not to teach foraging, but to introduce (or rather reintroduce) wild plants into agriculture: Plants that need no water, no maintenance, no pesticide, and will reappear year after year. Many of these plants have been cultivated in the past, even spread to other continents by pioneers, and adapted naturally to other climates. But since we now live in the age of technology and mass production, these plants have been forgotten. Not because they are bad for us, quite the opposite, but simply because they do not fit the economic profile of infinite growth.
Many small scale farmers still have the knowledge on these 'forgotten edibles', but they are being pushed out into a fringe zone one after another by industrial food corporations. To survive farmers need to grow what they know will sell, what people referr to as 'common vegetables'. Many of these crops need a lot of water, maintenance, pesticides, come from suspicious sources & are not even very healthy for human physiology. I call them money-plants! Wheat, corn, tomato, cabbage, cucumber, pumpkin et cetera.
Sustainability is about diversity! But from an economic point of view it is useless to grow 1000 different plants in 1000 square meter because you cannot sell them. The only viable option is to grow the same plant in 1000 squaremeters, till the soil, deplete the nutrition, add chemicals, add pesticides, water a soil that is so messed up it will hardly retain water, harvest, add more chemicals, and hope to sell as much as you can before it gets old and you have to throw it away. I guess the plan is to deal with population health, desertification and famine as it comes along, because currently the currency of money is more important. Yup, we live in an age when tattooed paper is considered more valuable than human health!
Not sane. So let me introduce you to yet another forgotten species of edible plant. Not only is it edible & nutritious, invasive, and contrary to many money-plants it will heal the soil rather than deplete it, attract beneficial bugs to its' surrounding, bees and butterflies, but it is also very pretty. My twentyfourth article introduces the Starflower - Borago officinalis:


BORAGO OFFICINALIS:
According to my many books and websites the Starflower is endemic to the area, especially along the northern part of the Aegean coastline. It is cultivated and used throughout Europe for its healing properties and as a nice addition to salad. Borage is also cultivated in the US, where it is more popular as a herbal supplement: The Starflower oil, extracted from the seeds.
In the wild it thrives along roadsides and wastegrounds close to human settlements, but personally I have never seen it in a wild situation. But since it is a recommended companion plant for many other species (especially strawberry, cabbage and tomato) I actually planted some seeds with staggering results. It's a bee and butterfly magnet, and once it flowers it selfseeds quite vigorously. It's one of those plants you can't tell if you are weeding or harvesting, all you know is you have to keep the population down or it might become invasive. So half goes to food, the rest to compost, and every tenth plant I allow to go to flower to spread yet again. Common English names: Borage, Starflower, Bee plant, Bee bread. Common Turkish names: Hodan, Zembil çiçeği,

MYTHOLOGY & HISTORY:
*Although history is vague, Borage is thought to have been introduced to Europe by the Arabs as a medicinal herb, spreading wild throughout the Mediterranean.
* The Romans would mix Borage tea and wine prior to combat, most likely to fortify themselves for the battle.
* Borage seems to have had the reputation of causing mirth, according to Pliny: “Ego Borago gaudia semper ago” (=I, Borage, bring always courage).
* According to old Swedish herbal tradition Borage cures heartache and melancholy, revitalising the spirit.

MODERN RESEARCH:
Borage is a fairly common domestic herbal remedy that has been used since ancient times. It has a particularly good reputation for its beneficial affect on the mind, being used to dispel melancholy and induce euphoria. This is backed up by modern science through the discovery of essential fatty acids (EFA), one of the most important nutrients in Borage. An EFA deficiency can directly affect mood, internal inflammation and various cellular functions. EFA also improve hair and nail growth, as well as promoting a healthy appearance. Especially the seeds of Borage has very high levels of gamma linolenic acid (GLA). An oil extracted from the seeds is commercially sold to boost deficiencies in children as well to ensure proper growth, help to regulate the hormonal systems and lower blood pressure. The plant is also used to restore the adrenal glands to their natural balance, which in turn creates a calmer body and mind.
Borage is also a good herbal supplement for women because it contains high levels of calcium and iron, nutrients many women are deficient in. Potassium, Zinc, B and C Vitamins & beta carotene are dense in Borage, making it very nutritional.
Borage is also used to reduce fever, stimulate milk production and calm nerves [1996, Elpel]. According to Plants for a Future database (PFAF), Borage treats rheumatism; softens the skin and soothes irritated tissue; eliminates toxins and purifies the blood; reduces nervousness and distress, relieves skin complaints and pre-menstrual tension. An infusion is taken internally in the treatment of a range of ailments including fever, chest- and kidney problems.

EDIBLE USES:
According to Evelyn Lyle Kalças (1974), Borage used to appear in Turkish markets around March a few decades ago. It was popular to put  in green pea soup, adding taste and as thickening agent. But that was 40 years ago. I have never seen it sold in Fethiye in modern times.
The smaller, younger leaves are best in fresh salads since they are not quite as bristly as the older leaves. If you still find them too disagreeable to eat fresh, you may find they are more useful when chopped up and added to soups or sautéed dishes. Borage tastes like cucumber, so wherever cucumber flavor is needed, borage can be used as a substitute. It can also be used as flavouring, just like bayleaf, added while cooking and removed before serving. The blue flowers make a beautiful addition to sallads.

OTHER USES:
Borage is useful as mulch and as compost. Its' leaves and stems contain calcium and potassium which may account for another reason why tomatoes do well near borage. Blossom end rot, which affects tomatoes, is caused by lack of calcium. Potassium helps plants to bloom and set fruit, which may increase production in tomatoes and strawberries. Whatever reasons for planting borage, it is likely to do a lot of good in a garden.

IMPORTANT NOTE:
The plant contains small amounts of pyrrolizidine alkaloids, thus some herbalists warn that Borage can be toxic to the liver. Still, Borage has been eaten by thousands of people for centuries and is likely to be consumed in complete safety in normal quantities, but it is always good to be moderate in your consumption.
Borage leaves do contain a small amount of silica which may irritate the skin of sensitive individuals, so handle with care. The leaves, stems, and sepals of borage are covered with fine, silvery or white hairs that give the plant a soft sheen. The hairs may add to the plants appearance, but some people find the bristle of hairs discourages the plant to be used as food.

CONCLUSION:
Borage might not be the most potent healer around, but the multi-facetted usages of being edible and medicinal; fast growing and producing a lot of bulk, hardy and invasive, and an excellent companion plant, it would be one of my first choices to add in a regenerative garden.