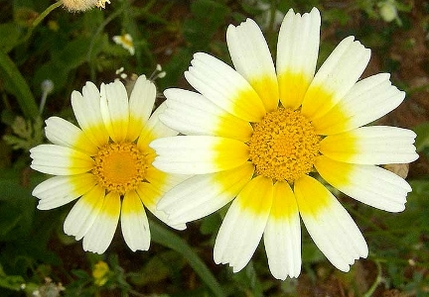 INTRODUCTION:
Sometimes we learn things from the most odd sources. Me, being an aspiring botanist/herbalist, spending half the day in the garden and the other half with my nose buried in books on plants, I thought I had the plantlife of at least my own little biotope figured out by now. Judge my astonishment when my neighbour, a six year old girl here in KayaKöy, suddenly grabs a big beautiful flower from a field, peels off the outer layer of the stem and nibbles down the rest. So I scanned internet and my many books and finally came up with the Garland chrysanthemum. Currently it grows in abundance all around us: In deserted lawns in Fethiye and fighting over space with the poppies and mallows in the fields of KayaKöy. It is a bit fiddly and not very tasty eaten raw, but none the less edible and very nutritious.
It's amazing how comfortable we have become foodwise. Did you for example know that common grass is not only edible but supernutritious? It's just hard to chew and digest, and that's not comfortable, thus few people know about it. The secret to eating grass is using a blender, but that's just too complicated, thus people rather spend money on from-faraway-fashionable superfoods like wheat grass and fish oil, when in fact their own lawn might just be more healthy. Bit off track there, sorry... My point is that every populated biotope on this planet would be able to sustain itself with a little bit of research and knowledge, but our species rather choose to waste fossil fuels on import/export while poor countries are turned into deserts and people die of hunger. This makes me sad! Now back to the Garland chrysanthemum:


CHRYSANTHEMUM CORONARIUM:
Common English names: Garland chrysanthemum, Chrysanthemum greens, Edible chrysanthemum, Chop suey green, Crown daisy, Japanese-green. Common Turkish names: Ala gömeç, Dallama, Koyungözü, Sarı papatya. The Garland chrysanthemum is native to the Mediterranean and East Asia and is one of the few annual plants in its’ genus. In many parts of Asia it is cultivated and frequently used in a wide range of dishes. All chrysanthemums have a long history within traditional Chinese medicine for treating fever, hypertension, dry eyes and headaches, as well as other inflammatory conditions.

MODERN RESEARCH:
Botanism is sketchy business at its' best. As mankind struggles to adapt throughout history, from Sinatra to Beatles to Lady Gaga, so does nature. And considering global climate change, who knows what plant feeds of what minerals these days? Plants, just like us, wish to survive. And in doing so they change their habits... Can we even trust potato these days?
Latest piece of information I found on Chrysanthemum was: The plant is rich in minerals, vitamins, potassium and carotene. In addition, the plant contains various antioxidants that have potential long-term benefits for human health, although toxic (dioxin) properties have also been observed. A study published in the September 2003 edition of the medicinal plant journal "Fitoterapia" found that fresh flower heads taken from Chrysanthemum coronarium had antimicrobial properties. Another study published in the March 2002 edition of "Cancer Letter" reported that chrysanthemum had anti-tumor properties. Chrysanthemum have pain numbing, antibacterial, anti-cancer, anti-fungal, antioxidant, anti-inflammatory effects, and has has been shown to lower blood pressure. Chrysanthemums contain chemicals called pyrethrins which can cause poisoning. Products containing pyrethrins can be toxic to the nervous system and may cause eye damage, asthma and inflammation.

EDIBLE USES:
Young shoots and stems can be eaten raw or cooked and are strongly aromatic. The flower - The centre of the flower is bitter so only the petals are normally used. The plant’s greens are used in many Asian cuisines: They appear in Cantonese dishes and Hong Kong cuisine in stews, casseroles, and hotpots. In a hotpot, it is added at the last moment to the pot to avoid overcooking. A botanist colleague told me the young leaves and shoots are gathered and eaten during winter in Turkey. In Datça a dish called 'Unlama' is made: Fry garlic, stir with flour, add the plant (finely sliced) and then boil in water. Add lemon. Voilá!

OTHER USES:
Besides being edible some sources promotes the the Garland chrysanthemum as a good companion plant, protecting neighbouring plants from caterpillars.

CONCLUSION:
People are usually sceptical of 'controversial food' because of allergies and small doses of toxins, that rather than to benefit from the many healing properties of medicinal food, they stick to known foods and patented medicines, hoping to stay healthy and fit. Again, many folks fear that eating wild foods will give them parasites and diseases, whereas when you look close into the matter many of these plants actually expel parasites and strengthens the immune system, where as processed foods invites them in through sheer breathing...
It is my belief that the miracle plants of nature once had an important role in our diet, that foraging in nature on the side of small scale farming is part of the reason for the legend of Mediterranean health and longevity. It is also my belief that processed foods and patented medicines is a step in a bad direction. I believe this weakness we have towards natural food is merely a question of adaptation, that we have been living on dull food so long our bodies react  towards the sheer medicinal potency of wild foods, and the Garland chrysanthemum is yet another example of how our young civilisation is mistreating resources as well as knowledge. Then again, I have no proof. All I know is I'll be dining for free this evening, and if you do not hear from me next issue I was dead wrong.

IMPORTANT NOTE:
Although it has many benefits, chrysanthemum has also been found to have documented side effects. Chrysanthemums is a part of the Asteraceae family, known to cause allergic reactions in some people. If you are allergic to ragweed, dandelion, goldenrod, sunflower or daisies, avoid chrysanthemum. If you come into contact with chrysanthemum and experience asthma, skin rash, eczema, hay fever, inflammation of the sinuses or hives, you are most likely allergic. Avoid if you are breastfeeding or are pregnant.
Powered by