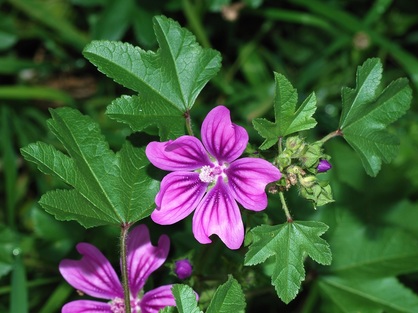 
MALVA SYLVESTRIS:
Common names: English: Common mallow, High mallow, Tall mallow, Blue mallow, Cheese-cake. Turkish: Ebegümeci, Develik, Kabalık. Around our neighbourhood it is known as Ebegümeci. The Latin name Malvaceae derives from the Greek, ~malake~ meaning ~soft,~ from the special qualities of the mallows in softening and healing. Despite older records promoting the Common mallow as a miracle plant modern research has degenerated it into a weaker relative to the more famous Marshmallow (Althaea officinalis) and only favourable where Marshmallow is not obtainable. This is obviously the case in our region since during my one year in the Fethiye area I have encountered Marshmallow once, whereas the Common mallow grows all around us. Even though it is a fairly beautiful flower your average gardener would probably label it an invasive weed due to its hardiness and reproductive properties. And that's just it: Mother nature providing food in abundance making a mockery out of the hard toiling farmers planting, watering, nursing and weeding to produce food. When basically every field up here in Kayaköy where I live is surrounded by healthy food requiring no care what so ever.

MYTHOLOGY & HISTORY:
* Greeks used it as a medicine on account of its mucilaginous and cooling properties. Mallow was employed by ancient Greek physicians to treat internal and external disorders, calling it omnimorbium, meaning "the remedy of all illnesses." It continued as an important "cure-all" treatment throughout the years, and like all mallows, it is principally known for its soothing qualities.
* The roman Naturalist Pliny the Elder suggested that the use of mallow juice on a daily basis prevented any type of illness.
* In 16th century Europe it was said ”to soothe whatever ails you”.
* Mallow has been cultivated and eaten as a vegetable in China since 500 AD.
* According to the Bible in the chapter of Job 4 we read of Mallow being eaten in times of famine.
* The chicory plant is one of the earliest cited in recorded literature. Horace mentions it in reference to his own diet, which he describes as very simple: "Me pascunt olivae, me cichorea, me malvae" (= As for me, olives, endives, and mallows provide sustenance)

MODERN RESEARCH:
Malva sylvestris, like all mallows, is a demulcent, and its particular excellence involves soothing irritated tissue and relieving various forms of inflammation. The leaves contain high amounts of mucilage, which give the herb most of its soothing activity. Mallow can contribute to ease the pain and treat inflammation of asthma, laryngitis, bronchitis, sore throat or dry, hacking cough, as it helps rid the lungs and respiratory tract of excess fluid and mucus, while at the same time, it helps to soothe irritation and inflammation of the mucous membranes.
It is rich in vitamin A and C and iron. Modern research has promoted it to be antioxidant, antimicrobial, anti-inflammatory, antiphlogistic, astringent, demulcent, emollient, expectorant, laxative and carminative. The German Commission E (A commission giving scientific expertise for the approval of substances and products previously used in traditional, folk and herbal medicine) approve Malva sylvestris for cough, bronchitis, inflammation of the mouth and pharynx.

EDIBLE USES:
In the Mugla region mallow is commonly boiled and eaten with meat and rice. It can also be sauteed or added to soups to thicken them. Basically it is treated very much the same as spinach in any dish. My neighbour recently gave me this recipe: Sautee onion and mallow, then add bulgur and boil the mix until the bulgur is properly cooked. Pour off the water and add garlic and a small amount of pomegranate juice and mix. Eat it!

OTHER USES:
The mallow root can be boiled to produce a vegetable cream: Mallow is a species of the common marsh mallow plant and is where the ”marshmallow” confection got its name. The marshmallow root was used in the first marshmallow type of candies as an aid to sore throats and the common mallow has the same properties. It is edible as a salad green or potherb and works well as a soup thickener. When mature, the green fruits (cheese-cakes) makes a good nibble.
The leaves and flowers are the main parts used, their demulcent properties making them valuable as a poultice for bruise, inflammations, insect bites etc, or they can be taken internally in the treatment of respiratory system diseases and problems with the mouth and digestive tract. When combined with eucalyptus it makes a good remedy for coughs and other chest ailments. Externally it can be used as a schampoo to strengthen weak hair. It is also used to extract dyes and the stem produces a fibre useful for cordage, textiles and paper making.

IMPORTANT NOTE:
When grown on nitrogen rich soils the plant tends to concentrate high levels of nitrates in its leaves, not dangerous in small doses but it is not recommended eating large quantities.

CONCLUSION:
Even though the common mallow is not as potent as most of the wild edibles I encounter in my research it compensates by sheer abundance. In my own backyard and by the roadsides of Kayaköy it is as common as grass, although difficult to identify since the actual flowers grow scarce and only the leaves are visible. Gathering information from US and UK sources most claim that the common mallow produces leaves in early spring and flowers in summer, but here in Aegean Turkey it is abundant even in winter. It is available by the bundle in the vegetable market since one month back.
Powered by