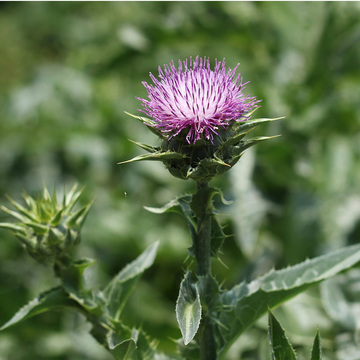 INTRODUCTION:
According to anthropological studies mankind, globally and throughout history, has had a diverse diet from around 80.000 plants. According to wikipedia there are today around 50.000 plants available as food, according to Plants for a Future database 20.000 of these are documented. And from all this incredible diversity a mere 20 plants currently make up for 90% of global food production. Common staple foods such as wheat, potato, rice, corn, cassava, et cetera.
Scientists are desperately jumping up and down on the warning light button to stress the crisis of future food security, when we are using but 0.04 percent of the resources around us for﻿ food production. So let's bump that sad statistics up a bit by introducing yet another very common edible and medicinal plant. My twenty eighth article introduces the Milk thistle - Silybum marianum:

QUOTE:
“Like the Greeks and other powers before them, the Roman empire collapsed for a host of reasons, but underlying much of their troubles was overworked, exhausted, and eroded farmland which strained their ability to feed their citizens. As Montgomery writes, 'Rome did not so much collapse as consume itself. If the world makes the same mistakes that Rome made, what's the next act?' Soil, it seems, has a larger hand in history than it may appear.”
~ Matt Hansen


SILYBUM MARIANUM:
Next to the stinging nettle, thistles are probably the most misunderstood and underestimated plants of our time. Not only are they an invasive source of food, but throughout history they have been promoted as potent healers. The only real trick is to harvest them due to their rough and spiny exterior. There are many thistles around us and to my knowledge all are as edible as they are medicinal. Many also look very similar to each other and it can be difficult to differentiate, but the most researched and probably most common in our region ought to be the Milk thistle – Silybum marianum.
Common names include Milk thistle, Blessed milk thistle, Marian thistle, Mary thistle, Saint Mary's thistle, Mediterranean milk thistle [English]. Gengel, Deve dikeni, Eşek dikeni, Sütlü kengel [Turkish] This species is a biennial plant, originally a native of Southern Europe through to Asia, in modern times a common 'weed' throughout the world.

MYTHOLOGY & HISTORY:
* Milk thistle has been used for 2,000 years as an herbal remedy for a variety of ailments, particularly liver, kidney, and gall bladder problems.
* Milk thistle, along with dandelion and other extracts, are sometimes referred to as hangover cures as the bitter tincture supposedly helps organs rid toxins after heavy drinking.
* Legend says, that as the Virgin Mary was feeding baby Jesus, some of her milk dropped on the thistle near her feet, which produced the white spilt-milk effect, which has distinguished this herb ever since and as a consequence became a revered herb.

MODERN RESEARCH:
Silybum marianum is used in traditional Chinese medicine to clear heat and relieve toxic material, to soothe the liver and to promote bile flow. Within the western tradition the seeds of Milk thistle are considered one of the most potent liver medicines. Other sources claim that the liver cleansing effects of Milk thistle are so potent and direct it can be used as an antidote, even in cases of poisoning with a lethal dose of death cap mushroom.
Consuming Milk thistle is also thought to reduce inflammation, act as a potent antioxidant, and has been used to counter diabetes, hepatitis and even cancer. An extract from the seeds is promoted as a popular remedy for various types of cancer and liver diseases. Even though both in vitro and animal research promotes the benefits of Milk thistle, modern science is skeptical and controversial due to the lack of conclusive evidence in human studies.

EDIBLE USES:
The roots can be eaten raw or boiled and buttered, or par-boiled and roasted. The young shoots in spring can be boiled and buttered. The spiny bracts on the flower head were eaten in the past like globe artichoke, and the stems (after peeling) can be soaked overnight to remove bitterness and then stewed. Younger stems can be peeled and consumed raw. The leaves can be trimmed of prickles and boiled and make a good spinach substitute, or they can be added raw to salads.
Being overly fond of beer, I occasionally hit the outskirts of Kayaköy with thick gloves and a knife, hoping to regenerate what is broken with nature's own fast food.

IMPORTANT NOTE:
Side effects are usually mild and may involve stomach upset and diarrhea. Some people may get a rash from touching milk thistle plants. However, a serious allergic reaction is very rare. Do not take milk thistle if you are allergic to ragweed, chrysanthemums, marigolds, chamomile, yarrow, or daisies. Not recommended during pregnancy or when breastfeeding.