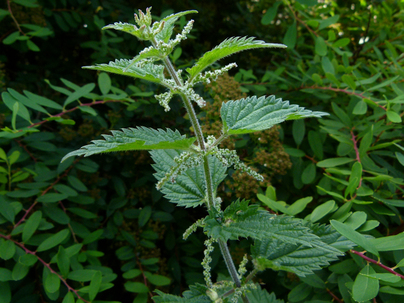 INTRODUCTION:
The author of this article is a hobby-herbalist studying wild edible plants in the Aegean region, preparing to set up a permaculture farm in the area. The vision of this endeavour, and the aim of this column, is to spread knowledge on wild edible plants and how they can prevent our most common diseases BEFORE we develop them. As knowledge is lost, vegetable markets replaced by supermarkets, a thousand years old tradition of smallscale agriculture and foraging tradition replaced by plasticwrapped food produce, some fear the Legend of Mediterranean Health and Longevity will turn into Myth. This column is a contribution to preserve that legend. This is the second article, introducing the stinging nettle:

QUOTE:
”Every living cell in your body is made from the food you eat. If you consistently eat junk food then you'll have a junk body.”
~ Jeanette Jenkins


URTICA DIOICA:
Commonly known as Isırgan [Turkish] or Stinging nettle [English]. There are four different types of nettles registered in the Aegean region, all edible and nutritious, where the most common, researched and used seems to be Urtica dioica: The common 'Stinging nettle'. Stinging nettles thrive on nitrogene-rich soil and usually grow in large clusters around abandoned settlements, farmhouses or directly on piles of manure and is generally considered an invasive pest. Although not nearly enough a powerful a healer as its' controversial cousin 'Cannabis sativa' (=Hemp) the stinging nettle has many similar properties. Yet whereas Cannabis has been illegalised due to its' intoxicating effects, the Stinging nettle has rather been dumbed down to a noxious weed. When in fact nettles are one of the most undervalued of economic plants around with a wide range of uses: For food, medicines, fibres and also a very important plant for wildlife.
According to the famous botanist Frank Cook the stinging nettle ought to be promoted to the national plant of the UK due to its' abundance and beneficial effects on the human body, just listing the nutrients by name would require more than half an A4 page. The whole plant is edible once you neutralise the sting by soaking or heating the plant. But stems might be a bit chewy and older leaves should be avoided as they contain low doses of nitrogen, thus best stick to the young shoots as a food source.

MYTHOLOGY & HISTORY:
* In Norse mythology Thor the god of thunder is often represented by nettles and burning them on the fire will protect you from his lightning during thunderstorms.
* The Buddhist Saint and Yogi Milarepa, also known as the Green God, is often shown as being green and hairy after eating nothing but nettles during his meditations.
* The Romans are said to have brought nettles to Britain where they used them to relieve rheumatism and arthritis by flogging themselves with small branches tied together to stimulate the blood. They also used them to keep out the cold of the damp British climate.
* Historically, nettles have been used to make clothing for 2,000 years, and German Army uniforms were made from nettle during World War I due to a shortage of cotton. In WWII the leaves were used to make green dye for military uniforms.
* Nicholas Culpepper, in his classic work 'Complete Herbal and English Physician' says that the planet Mars governs nettles: "You know Mars is hot and dry, and you know as well that winter is cold and moist; then you may know as well the reason nettle-tops, eaten in the spring, consumeth the phlegmatic superfluities in the body of man, that the coldness and moistness that winter hath left behind."

MODERN RESEARCH:
Nettles contain vitamin A, vitamin B1 (thiamine), B2 (riboflavin), B3 (niacin), B5 (panothenic acid), vitamin C, vitamin D, vitamin K, vitamin E. chlorophyll, potassium, calcium, mangaan, acetycholine, serotonine, sulphur, iron, selenium, magnesium, chromium and zinc. What it means in practice is a stable intake of nettle will keep you healthy as a horse. Research is contradictive depending on what sources to rely on, but some actually suggest the stinging nettle to contain EVERYTHING the human body needs to stay happy and healthy and more.
Late research on this plant has shown promise in treating Alzheimer's disease, cancers, bladder infections, bronchitis, bursitis, gingivitis, gout, hives, kidney stones, laryngitis, multiple sclerosis, PMS, prostate enlargement, sciatica, and tendinitis. Before modern research, earlier folk remedies has seen the stinging nettle as a natural healer before we even discovered cancer.

EDIBLE USES:
All over Turkey the nettle seem to be a popular addition in gözleme and börek. Around the Aegean and Mediterranean regions it is sauteed with or without egg, sometimes topped with yoghurt. Further North cooked with bulgur and rice. The most resemblance to the traditional Northeuropean dish 'Nettle soup' would be the Isırgan kuymak from Trabzon area: A soup from nettle where water, milk, flour from wheat and/or corn, minth and garlic is added.

OTHER USES:
Everyone knows about the stinging nettle, I guess, because it grows everywhere and it stings you! What common knowledge promotes is that this nasty, noxious weed should be rooted out and gotten rid of for good. Because it stings you! What fewer people seems to know is that this 'sting', which is actually a combination of chemicals injected directly into the skin, is nature's own flu shot: It's medicine! The art of flogging nettles is an ancient method called 'Urtification', and it has been used for ages in order to treat rheumatism, arthrisis and eczema. In effect, it acts as a counter-irritant, bringing more blood to the area to help remove toxins. Secondly, the acids from the nettles is believed to have a beneficial effect upon skin, blood, bones and joints.
As an edible nettles have a long history of use in the home as a herbal remedy and nutritious addition to the diet. An infusion of the plant is very valuable in stemming internal bleeding, it is also used to treat anaemia, excessive menstruation, haemorrhoids, arthritis, rheumatism and skin complaints, especially eczema. The root has been shown to have a beneficial effect upon the prostate gland and the seeds and leaves of stinging nettles are used by certain populations to treat arthralgia, colds and flu, diabetes, joint pain, asthma, hypertension and liver diseases. Although generally considered a tonic (=regular consumption slowly improving health), a blood purifier, and relieving rheumatism and arthrisis, many sources also claim it to effectively cure allergies, especially hay fever and eczema. Externally it has been used to improve the appearance of the hair, and is said to be a remedy against oily hair and dandruff. According to the ayurvedic tradition it is also supposed to act as an aphrodysiac in males.

CONCLUSION:
Not only is the nettle an abundant food resource and a natural healer, but it has been used to make cloth, paper, fishing nets, sails, tablecloths, ropes and textiles since Neolithic times. Recent times has seen it as an antidandruff schampoo, in the making of pesto and nettle beer, as a rennet in making cheese, compost kickstarter and an excellent companion plant to fruit trees.
How this miracle plant has been degraded to a noxious weed is beyond my comprehension. Up in KayaKöy where I live young shoots seem to pop up everyhere in between the farms and houses. Down in Fethiye I have not seen it in the supermarkets but as for the vegetable market the time is now!
Powered by